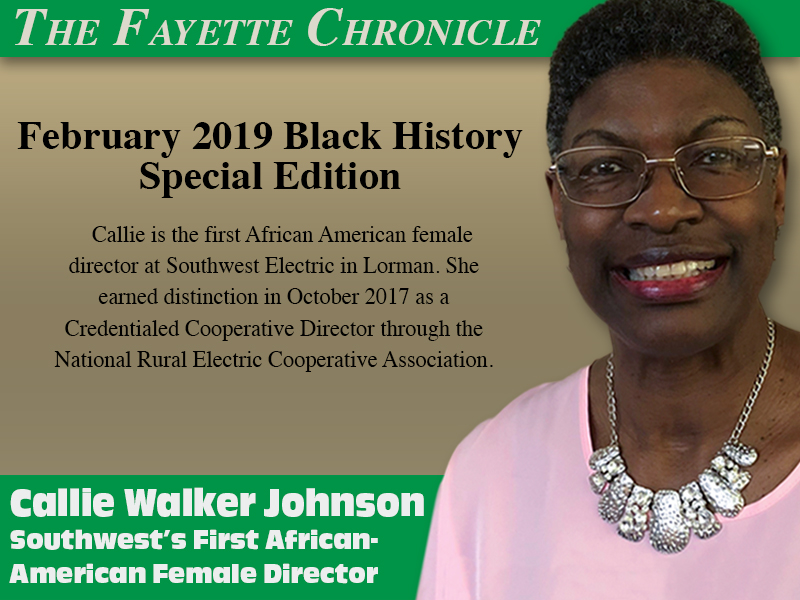 Posted at 16:08h in Press Releases by Jeremy Smith

Callie Ann Walker was born to Charlie and Dessie Walker of De Kalb, MS.  She, her sister and three brothers spent their childhood in Kemper County.

She found her way to Jefferson County when she applied and was accepted to Alcorn State University in 1970.  While attending Alcorn, she met Bernard Johnson, who became her husband of 44 ½ years.  There were together for 47 years before he passed earlier this year.  They raised two children, Chris and Desha, in Jefferson County.

Callie earned a Bachelor of Science in Secretarial Science in 1974 and worked in the Registrar’s office for four years.  In 1978, she became the first minority to work in the Personnel Department of Bechtel Construction at the Grand Gulf Nuclear Station.  While working as the Administrative Assistant in the Engineering Department, she completed her Master’s of Science Degree in Guidance and Counseling in 1988.

Callie is the first African American female director at Southwest Electric in Lorman.  She has served as the at-large director since February 2015 and was recently appointed to represent District 7, which includes Claiborne and Jefferson counties.  Callie earned distinction in October 2017 as a Credentialed Cooperative Director through the National Rural Electric Cooperative Association.

Callie is an active member of Waterloo Missionary Baptist Church in Lorman.  She participates in the Mother’s Ministry, teaches Sunday School and visits the residents of Jefferson County Nursing Home.  She is also a member of the Jefferson County Woman’s Auxiliary and is one of two missionaries who travels to other churches throughout Jefferson County giving updates on ministries.

Callie believes that her life is directed by God.  She enjoys working outside and around the house, being in nature, reading and encouraging people.